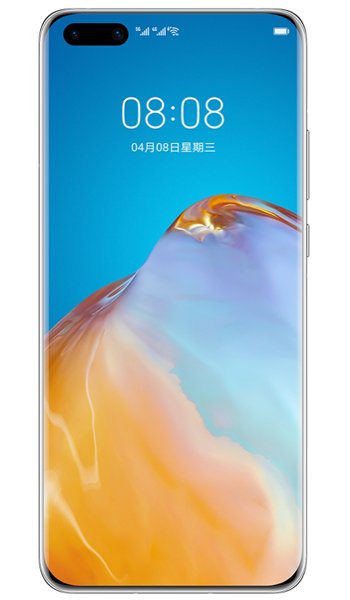 What attracts millions of users to Huawei smartphones are the cameras. The Huawei P40 Pro has a bunch of amazing things that ensure its success in the market. Among them are 50x digital zoom, a separate video camera, and a dual front-facing camera with 3D face scanning. The processor is full-featured, and it comes with a 5G module.

Ever since the Huawei P20 Pro, the manufacturer has been seriously focusing on the design of the flagship cameras. In the Huawei P40 Pro, we see the world's largest mobile sensor, with a diagonal of 1/1.28 inches. We do a quick comparison with the P30 Pro - there the diagonal was 1/1.7 inches. Phenomenal growth! The camera array in the Huawei P40 Pro is therefore impressive. At the same time, it does not interfere with the comfortable use of the device.

The smartphone has received five color solutions of the housing. Three of them are basic - white, black and blue, and the other two have frosted glass - gold and silver.

The front panel of the Huawei P40 Pro looks impressive. The glass is made using Quad-Curve Overflow Display technology. The bezels are symmetrical. The buttons have kept their places.

This model of Huawei the user can unlock in two ways - by facial recognition or fingerprint scanning. The 3D face scanner has retained the previous style in the styling of the flagships. It can recognize the user's face even in complete darkness. The fingerprint scanner is below the display. Its area has increased by 30% and its speed by as much. The P40 Pro recognizes its owner's fingerprints in the blink of an eye.

The smartphone also features IP68 standard water protection. You can submerge it in the pool as well as shoot underwater. The developers have provided a separate "Underwater" shooting mode.

Huawei P40 Pro offers a satisfyingly large display diagonal - 6.58 inches. Its dimensions are for people with an interest in non-small devices. At the same time, working with it with one hand is completely realistic. If you still want a more compact model, you can opt for another flagship - Huawei P40.

The matrix is OLED with an aspect ratio of 19.8:9. The resolution is 2640 x 1200 pixels. The user has received something in between Full HD and Quad HD. There is a good balance between detail and power efficiency.

In September 2019, Huawei introduced the Kirin 990 processor to the world. It came in two versions - with and without a built-in 5G Balong 5000 modem. The flagship Huawei P40 Pro, as already mentioned, goes with 5G. In addition, the device has received an increased core frequency and a more powerful neuromodule.

Additionally, four layers of graphene are responsible for taking out the heat generated in the Huawei P40 Pro. Among its main advantages is the speed of artificial intelligence. Thanks to it, it is possible to process photos without loss of quality and confident image stabilization.

As for the memory, in the Huawei P40 Pro the user gets 8 GB of RAM and 256 GB of internal memory. This is a normal combination for a flagship. Good news is that you can expand the storage with a NanoSD card.

The Huawei P40 Pro is an impressive acquisition if you're excited about smartphone photography. It has 4 rear camera modules. The setup is similar to the one in the P30 Pro: one 50 MP, one ultra-wide 40 MP, an 8 MP telephoto module and a ToF camera.

During the day, you can shoot with all 50 MP and crop the picture without losing quality. In darkness you need to turn on night mode. Your pictures will come out accurate, bright and perfect.

No matter what mode you're shooting in, the new ISP image processing engine and the manufacturer's NPU neuromodule will help. They complement optical stabilisation. And the tele module has 12 MP resolution - 50% more than the P30 Pro.

With the Huawei P40 Pro, your photos will turn out better "on all fronts". Selfies with blurred backgrounds are improved, skin tone is more natural and detail is high. Focusing in dark conditions is superfast.

Instead of an ultra-wide camera in the Huawei P40 Pro, the manufacturer offers a separate video camera. Its sensor is CineWide with a 3:2 aspect ratio. Among the new things is shooting in 4K at 60 frames per second, HDR support, shooting slow motion video at 7680 frames per second.

We also have a new feature - Golden Snap. It works like this: the artificial intelligence itself chooses a moment that is ideal for shooting. The user only needs to press the button, then the smartphone records a 4K video with a length of 1.7 seconds. From the piles of footage, the software selects the best. Taking a picture of your friend jumping in the air? You'll get footage of the moment he jumped the highest, not how he landed.

The front camera on the Huawei P40 Pro is one. Don't let the second ToF sensor confuse you. It's designed to blur the background of portrait shots. The front camera itself is 32 MP. It has autofocus and f/2.2 brightness. And here the quality is higher. When shooting against the sun there is less flare, the dynamic range is higher. The night mode makes the pictures brighter, even if you think it's hopeless to get a quality shot. With the Huawei P40 Pro, you can shoot 4K video at 60 frames per second.

The battery of the Huawei P40 Pro has a capacity of 4200 mAh. The smartphone supports 40W fast charging technology, 27W fast wireless charging and 2.5W reverse charging. Up to 100% charge can be replenished in just an hour. The display frequency of 90 Hz does not represent much of a cost. Thus, the Huawei P40 Pro provides a satisfactory level of autonomous operation. From morning to evening you can rely on it with moderate use of the device.

At first glance, the Huawei P40 Pro may seem like a slightly better version of the P30 Pro. Dig into the details and you'll find a new flagship. It features curved glass on both sides, exciting body colours, a display with a notch that hides a 3D face scanner. The processor and graphics are powerful, you also get fast artificial intelligence and 5G support.

How much does Huawei P40 Pro cost?

The base approximate price of the Huawei P40 Pro was around 970 EUR after it was officially announced. At this point, the price may be lower.

What is the release date for Huawei P40 Pro ?

What is the weight of Huawei P40 Pro ?

What is the screen size of Huawei P40 Pro, how big is?

How many cameras does the Huawei P40 Pro have?

There is Quad main camera and Dual selfi camera.

How to restart Huawei P40 Pro ?

How to take a screenshot on Huawei P40 Pro ?