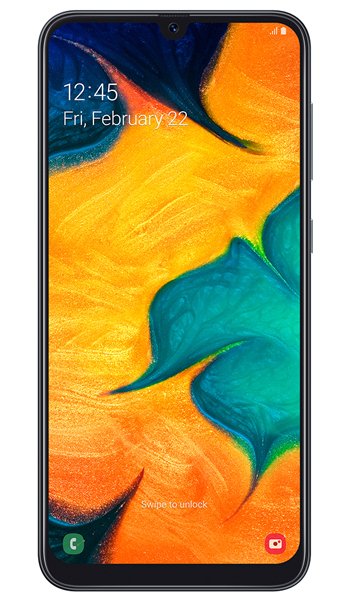 Here you will find everything about the Samsung Galaxy A30

Samsung has completely rethought its approach to the market and so in 2019 introduced the A-series, which is noticeably different from the previous models with this index. Now after the letter follow two digits. The main changes, of course, are not in the name. The manufacturer has made efforts to offer devices that are the epitome of the optimal price/quality ratio for each price segment. A definite winner is the variety of colour solutions. Versions with different memory are now also available. It's another thing to come out of your lethargic slumber and realise that the competition has gained momentum and strength.

The A30 looks the same as the A20. In appearance, it's hard to tell them apart. Looking at the A30, however, it is immediately clear that it is aimed at a youthful audience. It is versatile and suits both girls and boys.

Among its features, the main focus falls on the large AMOLED screen, which is not just a rarity in this segment. The dual camera for photos is already a typical attribute. It remains to add that the battery has a large capacity and the manufacturer has offered a full-fledged NFC.

Nowadays, many people are captive to stereotypes. Life has to prove them wrong. For many years there has been a perception that large phones are uncomfortable, unpleasant in the palm, etc. Bigger smartphone means bigger screen. Why don't some people think of that? And as we go back in time, we realize that there was also outrage over 4.5-inch screens, then 5-inch screens, etc. It's all down to timing. You get used to the new and then it's hard to go back to the old.

As for the body, it has a slight curve. It's what makes the A30 super comfortable to use. The color choices are a winning hand for Samsung. This model is available in four colors: teal, blue, black and red. In a picture, you'd hardly realize how beautiful they look. You have to see them in person what a beauty they are!

The A30 grabs you with its perfect display. Its diagonal is 6.4 inches. The resolution is 1080x2340 pixels (19.5:9). A few more features to mention: SuperAMOLED, 403 ppi, automatic brightness adjustment, AlwaysOn Display and third generation Corning Gorilla Glass.

For the first time in this price segment, a FullHD+ screen made with SuperAMOLED technology appears.

Take another look at the A30, it has virtually no bezels around the screen. Its camera is inserted into a U-shaped notch.

What makes it different from the flagships? The display has lower peak brightness as well as resolution. Otherwise, the screen has capabilities that were not available to the general public until this model came out. At least at this price!

One of the key features of the A30, rare in competitors, is the AlwaysOn Display. It allows you to view the time and notifications on the phone's screen without turning the device on. Plus, you can quickly log into desired apps.

Finally, we'll clarify that on a sunny day, the A30 won't give you any trouble. The brightness is enough to read the information on the screen.

On the A30, you get a fingerprint scanner and face unlock. Both features work. The first one - downright flawless. With the second one, there are some remarks, but there are such with flagships.

Facial recognition is a specific feature. Currently, users treat it now skeptically, now with warm love. You can decide for yourself how secure this type of device lock is.

On the market, the A30 is available in several variants - 3/32 GB basic and 4/64 GB for those users looking for more speed.

The A30's camera interface is typical of Samsung models. That's fine if you've had the company's device before. You'll get used to the new model in no time. Present modePro, AR Emoji and other appreciated effects.

For the main camera, we have two sensors - 16 MP (f/1.7) + 5MP (f/2.2), LED flash, 1080 resolution video recording. The wide-angle camera has an angle of 123 degrees (autofocus is absent). The regular camera has a 78 degree view. For this segment of smartphones, the camera performs well. There are slight quibbles with the indoor shots.

The A30 can record videos in FullHD resolution. The quality is good.

The smartphone has a built-in Li-Pol battery. Its capacity is 4000 mAh. The manufacturer has provided support for fast charging technology. In the package you also get a charger. There is no wireless charging, but for this segment it is not an exception.

In everyday life, the A30 will serve you for almost 2 days on auto brightness adjustment. This is an excellent benchmark considering the thickness of the device - only 7.7 mm.

The Samsung Galaxy A30 has gotten quite balanced and worthy of the attention of youngsters. It fully meets the requirements that they would raise to a modern device. Of course, age restrictions are out of the question. If you like the model, age is irrelevant.

Samsung Galaxy A30 - comments and opinions

How much does Samsung Galaxy A30 cost?

The base approximate price of the Samsung Galaxy A30 was around 250 EUR after it was officially announced. At this point, the price may be lower.

What is the release date for Samsung Galaxy A30 ?

What is the weight of Samsung Galaxy A30 ?

What is the screen size of Samsung Galaxy A30, how big is?

The screen size of the Samsung Galaxy A30 is 6.4" inches.

What are the dimensions of the Samsung Galaxy A30, what are the sizes ?

Does Samsung Galaxy A30 support 5G?

Is Samsung Galaxy A30 waterproof?

Does Samsung Galaxy A30 have fast charging?

Does Samsung Galaxy A30 have wireless charging?

Does Samsung Galaxy A30 have Google Play Services? ?

How many cameras does the Samsung Galaxy A30 have?

How to turn on Samsung Galaxy A30 ?

How to turn off Samsung Galaxy A30 ?

How to restart Samsung Galaxy A30 ?

How to take a screenshot on Samsung Galaxy A30 ?

Samsung Galaxy A30 VS Apple iPhone 6