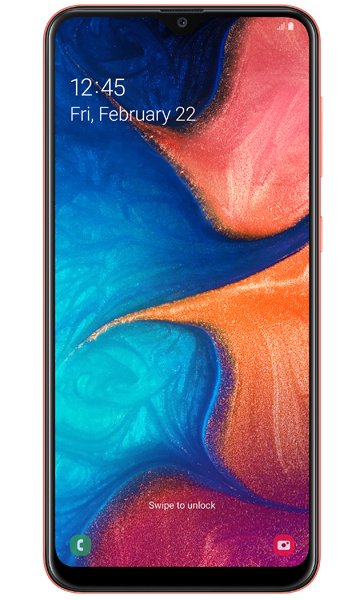 Here you will find everything about the Samsung Galaxy A20

In 2019, Samsung unveiled its revamped Galaxy A smartphone series. The models in it have already managed to attract the attention of consumers and conquer fans. Galaxy 20 is the budget smartphone in the series.

This year's budget smartphones from Samsung have finally started to look attractive. An excellent example of this is the Galaxy A20. The device features a small teardrop-shaped notch, a thin bottom bezel, rounded edges, a dual camera in the corner, and a fingerprint scanner in the middle of a glossy back panel that resembles strong glass.

The model is quite thin - 7.8 mm. Its weight is 169 grams. With these dimensions, the Galaxy A20 fits perfectly in the palm.

The only thing that can be counted as a minus are the color solutions. Samsung has chosen only black, red and dark blue. That is to say, you have a choice of the dark range. The Galaxy A30 model on the other hand comes in white and sky blue.

Additionally, we should mention that the maximum brightness level of the display is 345 cd/sqm, the minimum brightness level - 4 cd/sqm, the viewing angles are wide. There are inherent in AMOLED panels ideal black color and contrast. Thanks to the use of a notch and thin perimeter bezels, the Galaxy A20's display occupies 85% of the front panel. That's a pretty high benchmark for a device in the budget segment. For comparison, we give the flagships iPhone XS and Samsung Galaxy Note 9. For them, this indicator is 82.9% and 83.4%, respectively.

It's a new chipset, about which there's practically not much information. Presumably it's a version of the Exynos 7885, but with lower frequencies. By its characteristics, it can be referred to Samsung's mid-range chips.

The memory configuration is one - 3 GB of RAM and 32 GB of internal storage. The latter can be increased using a microSD memory card up to 512 GB.

In the wireless interface we see the standard acquisitions: Wi-Fi 802.11 b/g/n, Bluetooth 5.0, there is support for FM-radio and NFC.

The Samsung Galaxy A20 features a dual rear camera module. The main sensor has a resolution of 13 MP, an aperture of f/1.9 and an equivalent focal length of 28 mm. The additional sensor is a wide-angle, 5 MP f/2.2 and 12 mm. The maximum resolution when shooting video is 1080p@30 fps.

The camera's proprietary application deserves a standing ovation. It is simple and easy to use. By swiping up you switch between the rear and front cameras, by moving left-right - you can change modes, which are enough in number - photo, video, panorama, dynamic focus, professional, etc.

With dynamic focus you can take portraits with blurred backgrounds, while with professional you have manual ISO settings, exposure correction and white balance. With the latter, the user is given the option to fine tune on a scale of 2300K to 10,000K.

Given that the Galaxy A20 is a mid-range device, it's not possible to expect the footage it takes to be flagship-level. It should be noted that the white balance is occasionally lost, which is why photos sometimes take on a warmer tint. In sunny weather, because of the narrow dynamic range, the footage may appear overexposed. If you shoot in cloudy weather, when the light is softer, the photos turn out wonderful.

As evening falls and at night, the quality of the photos decreases. The HDR mode helps to take more contrasting shots.

The wide-angle module demonstrates mediocre image quality. It has a 5-megapixel sensor Small details, such as leaves and flowers, blend into a uniform mass.

Getting used to the pros and cons of cameras takes practice. Then with a dose of tweaking and the Galaxy A20, you can become the proud owner of gorgeous photos.

The Samsung Galaxy A20 is equipped with a lithium polymer battery with a capacity of 4000 mAh. It is not removable. The manufacturing company has provided fast charging technology - 15 W. The smartphone demonstrates good autonomous operation. In tests with screen brightness at the level of 200 cd/sqm, it lasts 10 hours. Under medium load without any particular problems to recharge will occur after two days.

Samsung has officially set a few benchmarks for battery performance:

The Samsung Galaxy A20 runs Android 9.0 operating system, complemented by the company's One UI.

Use the night mode for comfortable interaction with the device in darkness. Clear and intuitive menu items help to quickly adapt to the interface.

Unlock at a glance

With Galaxy A20 in hand, you can unlock the device instantly. Just bring it up to your face. The phone's access technology is of a decently high standard to protect your personal data from falling into other hands.

The Galaxy A20 is essentially the A30's little brother. It offers the same design, display diagonal, and virtually identical dimensions and mass (the difference is a mere 4 grams and is literally a tenth of a millimeter). More significant differences are found in the performance chipset, the weaker camera and the lower screen resolution. Memory is also downgraded.

When considering the Galaxy A20 as your future new smartphone, you need to consider its pros and cons. In a nutshell, these are as follows:

Cons: mediocre photo quality, low memory, low screen resolution. We recommend a case for the back panel as it is prone to scratches.

Samsung Galaxy A20 - comments and opinions

How much does Samsung Galaxy A20 cost?

The base approximate price of the Samsung Galaxy A20 was around 200 EUR after it was officially announced. At this point, the price may be lower.

What is the release date for Samsung Galaxy A20 ?

What is the weight of Samsung Galaxy A20 ?

What is the screen size of Samsung Galaxy A20, how big is?

The screen size of the Samsung Galaxy A20 is 6.4" inches.

What are the dimensions of the Samsung Galaxy A20, what are the sizes ?

Does Samsung Galaxy A20 support 5G?

Is Samsung Galaxy A20 waterproof?

Does Samsung Galaxy A20 have fast charging?

Does Samsung Galaxy A20 have wireless charging?

Does Samsung Galaxy A20 have Google Play Services? ?

How many cameras does the Samsung Galaxy A20 have?

How to turn on Samsung Galaxy A20 ?

How to turn off Samsung Galaxy A20 ?

How to restart Samsung Galaxy A20 ?

How to take a screenshot on Samsung Galaxy A20 ?