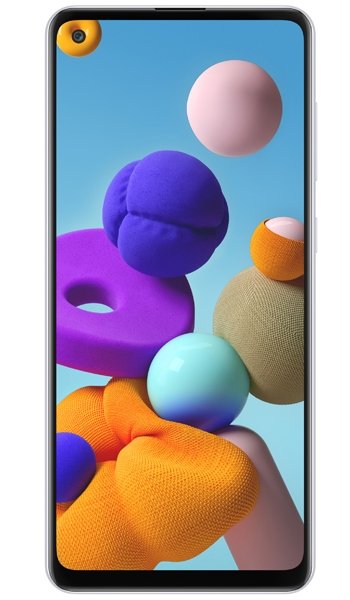 Here you will find everything about the Samsung Galaxy A21s

The Samsung A21s is an inexpensive smartphone designed to be competition to budget Chinese models. It has decent autonomous work, a nice and modern design, and also a quality photomodule.

In recent times, the front of most smartphone models is similar. The main differences are usually on the rear panel, where the main cameras are located. On the Galaxy A21s, the rear panel is executed in a monotone color. You'll find the device in several colors - black, white, blue and red. The casing is plastic and is not protected against dust and water getting inside. Glass is used only on the screen, which will attract your attention with its well-shaped bezels.

You'll find the fingerprint scanner on the rear panel. It's not built into the screen like in many other modern phones. The speed of the scanner is acceptable. It takes about a second. For this price class, this indicator is more than satisfactory. Face unlock is not provided in the Galaxy A21s.

The smartphone deserves the attention of users looking for larger displays. It offers a 6.5-inch diagonal. The graphics quality matches the claimed specs - 720 x 1600 pixels. The sharpness of the picture is slightly lacking. The side bezels are pleasantly thin. The selfie camera is located in the upper left corner of the screen. A rare but original solution.

The main camera of the Galaxy A21s consists of four modules. Each of them performs its own functions. The main one is 48 MP with an aperture of f/2.0. To improve light sensitivity and color rendering, the Quad Bayer scheme is used. In standard mode, the camera can shoot at a resolution of 12 MP. The second module is wide-angle with a resolution of 8 MP. A 2-Megapixel module is responsible for the quality of the pictures at night. An additional 2-megapixel lens is also provided.

The front camera is a 13-megapixel camera. It offers quality selfies. Even in low-light conditions, photographs come out juicy and bright. The detail is not bad, though there is no stabiliser. The colour rendering is close to reality.

To take quality photos at night, it is advisable to use the automatic night mode settings, which work only on the main camera.

The battery of the Galaxy A21s has a capacity of 5000 mAh. At maximum brightness, the charge consumption is not great. This will appeal to people who like to read before sleep. Watching videos and surfing the web for an hour will bring the battery level down by no more than 10%. This is not a bad indicator at all.

The Galaxy A21s doesn't feature wireless charging technology, but a quick charge can fill the charge up to 25-30% in just half an hour.

The affordable price of the Samsung Galaxy A21s and its feature set make it an ideal solution for people looking for quality budget models. The smartphone is convenient and powerful enough to perform all daily tasks.

How much does Samsung Galaxy A21s cost?

The base approximate price of the Samsung Galaxy A21s was around 190 EUR after it was officially announced. At this point, the price may be lower.

What is the release date for Samsung Galaxy A21s ?

What is the weight of Samsung Galaxy A21s ?

What is the screen size of Samsung Galaxy A21s, how big is?

The screen size of the Samsung Galaxy A21s is 6.5" inches.

What are the dimensions of the Samsung Galaxy A21s, what are the sizes ?

How many cameras does the Samsung Galaxy A21s have?

How to turn on Samsung Galaxy A21s ?

How to turn off Samsung Galaxy A21s ?

How to restart Samsung Galaxy A21s ?

How to take a screenshot on Samsung Galaxy A21s ?